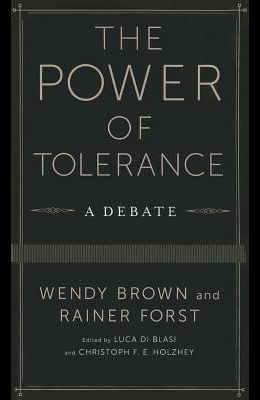 The Power of Tolerance: A Debate

We invoke the ideal of tolerance in response to conflict, but what does it mean to answer conflict with a call for tolerance? Is tolerance a way of resolving conflicts or a means of sustaining them? Does it transform conflicts into productive tensions, or does it perpetuate underlying power relations? To what extent does tolerance hide its involvement with power and act as a form of depoliticization? Wendy Brown and Rainer Forst debate the uses and misuses of tolerance, an exchange that highlights the fundamental differences in their critical practice despite a number of political similarities. Both scholars address the normative premises, limits, and political implications of various conceptions of tolerance. Brown offers a genealogical critique of contemporary discourses on tolerance in Western liberal societies, focusing on their inherent ties to colonialism and imperialism, and Forst reconstructs an intellectual history of tolerance that attempts to redeem its political virtue in democratic societies. Brown and Forst work from different perspectives and traditions, yet they each remain wary of the subjection and abnegation embodied in toleration discourses, among other issues. The result is a dialogue rich in critical and conceptual reflections on power, justice, discourse, rationality, and identity.

Books similiar to The Power of Tolerance: A Debate

List of All Editions of The Power of Tolerance: A Debate