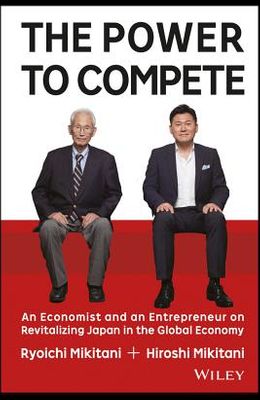 The Power to Compete: An Economist and an Entrepreneur on Revitalizing Japan in the Global Economy

If you're as interested in Japan as I am, I think you'll find that The Power to Compete is a smart and thought-provoking look at the future of a fascinating country. - Bill Gates, 5 Books to Read This Summer Father and son - entrepreneur and economist - search for Japan's economic cure The Power to Compete tackles the issues central to the prosperity of Japan - and the world - in search of a cure for the Japan Disease. As founder and CEO of Rakuten, one of the world's largest Internet companies, author Hiroshi Mikitani brings an entrepreneur's perspective to bear on the country's economic stagnation. Through a freewheeling and candid conversation with his economist father, Ryoichi Mikitani, the two examine the issues facing Japan, and explore possible roadmaps to revitalization. How can Japan overhaul its economy, education system, immigration, public infrastructure, and hold its own with China? Their ideas include applying business techniques like Key Performance Indicators to fix the economy, using information technology to cut government bureaucracy, and increasing the number of foreign firms with a head office in Japan. Readers gain rare insight into Japan's future, from both academic and practical perspectives on the inside. Mikitani argues that Japan's tendency to shun international frameworks and hide from global realities is the root of the problem, while Mikitani Sr.'s background as an international economist puts the issue in perspective for a well-rounded look at today's Japan. Examine the causes of Japan's endless economic stagnation Discover the current efforts underway to enhance Japan's competitiveness Learn how free market Abenomics affected Japan's economy long-term See Japan's issues from the perspective of an entrepreneur and an economist Japan's malaise is seated in a number of economic, business, political, and cultural issues, and this book doesn't shy away from hot topics. More than a discussion of economics, this book is a conversation between father and son as they work through opposing perspectives to help their country find The Power to Compete .

From the Back Cover A Penetrating, Sensitive, and Engaging Analysis of the Road to a Brighter Future for Japan The Japanese economy needs a jump-start. This is not an indictment, but rather an honest assessment of reality. The Power to Compete is a conversation between two of the men most qualified to discuss the situation: a CEO of one of the world's largest Internet companies and his father, a leading international economist and longtime Kobe University professor. Between Hiroshi and Ryoichi Mikitani, there is a depth of understanding--both of global issues and of the Japanese identity--that makes their conversations stimulating, informative, and even transformational. In each chapter of The Power to Compete, father and son tackle complex issues with intelligence and humor, arriving at a series of recommendations for the future that have the power to inspire a generation of readers to work for a more prosperous Japan. Their ideas are ambitious, wide-ranging, and often controversial, but they aren't shy about presenting them. Internationally, Japan has a reputation of resisting foreign ideas and isolating itself from progress. To change this image and cure the Japan Disease, members of all generations need to work together. The Power to Compete is an inspiring book that will show you how to take the history and traditions of Japan onto the global stage. Hiroshi Mikitani is not only an important business leader in Japan, but, along with his late father, Ryoichi, someone who has done a tremendous amount of strategic thinking on the Japanese economy, its history and its recovery. Mikitani-san is a shining example for up and coming innovators and entrepreneurs across Japan who will be critical to Japan's economy and, in turn, the U.S.-Japan relationship for years to come. -- John V. Roos, former U.S. Ambassador to Japan Ryoichi Mikitani was one of Japan's most thoughtful and probing economists, and Hiroshi is today probably Japan's most dynamic entrepreneur. And Ryoichi clearly passed on to his son a deep Japanese patriotism in the finest sense. Everyone who wishes Japan well should hope that the ideas they shared will receive the widest attention among the country's government and people. -- Benjamin M. Friedman, William Joseph Maier Professor of Political Economy, Harvard University, and author of The Moral Consequences of Economic Growth
From the front Cover Throughout its history, Japan has had a strong sense of its political, economic, and cultural individuality. This pride in the Japanese tradition has been one of the nation's greatest strengths--and one of its greatest weaknesses. In a world of connection, collaboration, and rapid exchange, Japan is falling behind. This is the reality readers must confront in The Power to Compete, a truly one-of-a-kind book with a sensitive approach to the most pressing issues faced by Asia's island nation. The authors and protagonists of The Power to Compete are Hiroshi Mikitani, chairman and CEO of one of Japan's largest Internet companies, and his father Ryoichi Mikitani, a leading Japanese economist. In this series of long-form conversations between them, the perspectives of father and son come together to uncover the path forward that will allow Japan to slough off its decades-long stagnation. Combining hard-hitting analysis with a little light banter, The Power to Compete is an enjoyable read that nonetheless presents important revelations and recommendations. Mikitani, Sr., who passed away shortly before the publication of this book, was a Harvard-educated international economist who studied under Nobel Prize winners and made important contributions to Japanese economic theory. His understanding of Abenomics, the free market economic reform plan of Japanese Prime Minister Shinzo Abe, provides a depth to The Power to Compete that is lacking in many other books on the topic. Mikitani, Jr., on the other hand, has the practical experience to know how the Japanese business world will be affected if the nation fails to evolve. Through their conversations, Mikitani, Sr., and Mikitani, Jr., arrive at a series of conclusions that will inspire readers to work on the international stage for Japan's development. Summarized concisely at the end of each chapter, these conclusions range from implementing business strategies like key performance indicators to using technological advancements in an effort to reform and modernize childhood education. The authors of this book do not suggest that Japan should change. Instead, they show how Japan can use its historical strengths and strong national identity to create an economic platform to return to competitiveness in the global arena. The Power to Compete is a cross-generational conversation that should engage a new group of entrepreneurs and officials in the process of creating a future for Japan that is both peaceful and prosperous.