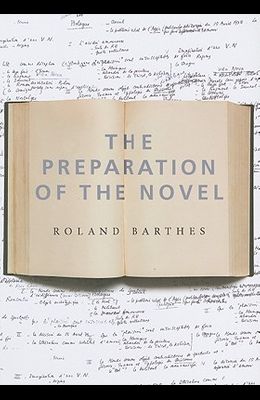 Completed just weeks before his death, the lectures in this volume mark a critical juncture in the career of Roland Barthes, in which he declared the intention, deeply felt, to write a novel. Unfolding over the course of two years, Barthes engaged in a unique pedagogical experiment: he combined teaching and writing to simulate the trial of novel-writing, exploring every step of the creative process along the way. Barthes's lectures move from the desire to write to the actual decision making, planning, and material act of producing a novel. He meets the difficulty of transitioning from short, concise notations (exemplified by his favorite literary form, haiku) to longer, uninterrupted flows of narrative, and he encounters a number of setbacks. Barthes takes solace in a diverse group of writers, including Dante, whose La Vita Nuova was similarly inspired by the death of a loved one, and he turns to classical philosophy, Taoism, and the works of Fran ois-Ren Chateaubriand, Gustave Flaubert, Franz Kafka, and Marcel Proust. This book uniquely includes eight elliptical plans for Barthes's unwritten novel, which he titled Vita Nova , and lecture notes that sketch the critic's views on photography. Following on The Neutral: Lecture Course at the Coll ge de France (1977-1978) and a third forthcoming collection of Barthes lectures, this volume provides an intensely personal account of the labor and love of writing.