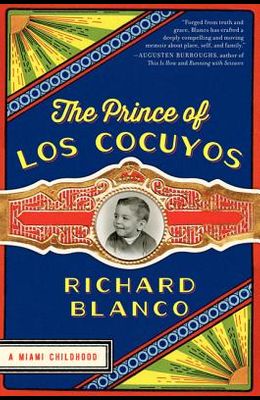 The Prince of los Cocuyos: A Miami Childhood

A poignant, hilarious, and inspiring memoir from the first Latino and openly gay inaugural poet, which explores his coming-of-age as the child of Cuban immigrants and his attempts to understand his place in America while grappling with his burgeoning artistic and sexual identities. Richard Blanco's childhood and adolescence were experienced between two imaginary worlds: his parents' nostalgic world of 1950s Cuba and his imagined America, the country he saw on reruns of The Brady Bunch and Leave it to Beaver --an exotic life he yearned for as much as he yearned to see la patria. Navigating these worlds eventually led Blanco to question his cultural identity through words; in turn, his vision as a writer--as an artist--prompted the courage to accept himself as a gay man. In this moving, contemplative memoir, the 2013 inaugural poet traces his poignant, often hilarious, and quintessentially American coming-of-age and the people who influenced him. A prismatic and lyrical narrative rich with the colors, sounds, smells, and textures of Miami, Richard Blanco's personal narrative is a resonant account of how he discovered his authentic self and ultimately, a deeper understanding of what it means to be American. His is a singular yet universal story that beautifully illuminates the experience of becoming; how we are shaped by experiences, memories, and our complex stories: the humor, love, yearning, and tenderness that define a life.

From the Back Cover Where am I from? Where do I belong? Who am I? These are the universal questions that have emerged from Richard Blanco's illuminating, story-rich poetry. Now Blanco explores these questions in this vivid account of his coming of age as the child of Cuban immigrants and his effort to contend with his burgeoning artistic and sexual identities. These are the stories of that shy yet precocious boy, known as Riqui to his family, who would grow up to be Richard Blanco, acclaimed as the first Latino and first openly gay presidential inaugural poet in U.S. history. Blanco grew up in the grip of two imaginary worlds: the Cuba of the 1950s that his family longed for and Blanco's idealized America, which seemed to exist outside the boundaries of Cuban Miami. The America of his fantasies from TV shows like The Brady Bunch offered a life just as exotic as the island paradise that was his birthright. The Prince of los Cocuyos evokes the complexities and glories--and humor--of navigating these worlds and the awakening of Riqui's homosexuality and artist's soul. Coloring books and pig roasts, opera and mambo, Easy Cheese and pork rinds--Riqui negotiates these contradictions and more. His abuela , a bookie, tries to make him un hombre , driving both his sexuality and his artistic inclinations deep into the closet; his first Thanksgiving turkey dinner ends with relatives in a conga line; his suburban backyard is transformed by his abuelo into a veritable farm with chickens and rabbits; and his mother decides to pack toilet paper and a pistol for his childhood pilgrimage to the promised land of Walt Disney World. Riqui finally finds his proverbial village as a teenager, working at the family market, El Cocuyito (The Little Firefly), lovingly mentored by its employees and customers. A prismatic and lyrical narrative rich with all the textures of Miami during the 1970s and '80s, The Prince of los Cocuyos is a resonant account of how Blanco came into his own sense of an authentic self, one that incorporated his Cuban-ness and his queerness, his American-ness and his artistic drive. Singular and universal, Blanco's story illuminates the experience of becoming through loving and loving through becoming: the way in which we are perpetually shaped by our experiences, our memories, and our stories of community and family.

Books similiar to The Prince of los Cocuyos: A Miami Childhood

List of All Editions of The Prince of los Cocuyos: A Miami Childhood