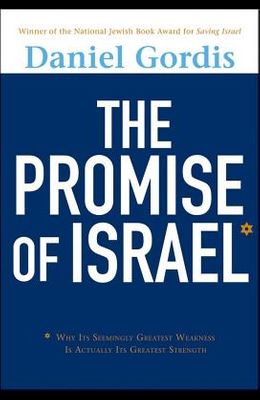 The Promise of Israel: Why Its Seemingly Greatest Weakness Is Actually Its Greatest Strength

Why Israel's greatest weakness is its greatest strength, and what its supporters and enemies can learn from its success Israel's critics in the West insist that no country founded on a single religion or culture can stay democratic and prosperous--but they're wrong. In The Promise of Israel , Daniel Gordis points out that Israel has defied that conventional wisdom. It has provided its citizens infinitely greater liberty and prosperity than anyone expected, faring far better than any other young nation. Israel's magic is a unique blend of democracy and tradition, of unabashed particularism coupled to intellectual and cultural openness. Given Israel's success, it would make sense for many other countries, from Rwanda to Afghanistan and even Iran, to look at how they've done it. In fact, rather than seeking to destroy Israel, the Palestinians would serve their own best interests by trying to copy it. Takes many of the most compelling arguments against Israel and turns them completely on their heads, undoing liberals with a more liberal argument and the religious with a more devout argument Puts forth an idea that is as convincing as it is shocking--that Iran's clerics and the Taliban should want to be more like Israel Written by Daniel Gordis, the author of the National Jewish Book Award winner, Saving Israel Daniel Gordis has been called one of Israel's most thoughtful observers (Alan Dershowitz) and a writer whose reflections are consistently as intellectually impressive as they are moving (Cynthia Ozick) Certain to generate controversy and debate, The Promise of Israel is one of the most interesting and original books about Israel in years.

From the Back Cover Praise for Daniel Gordis and The Promise of Israel If you asked me, 'Of all the people you know, who cares the most about the physical, moral, and spiritual health of Israel?' I would put the commentator and scholar Daniel Gordis at the top of the list.--Jeffrey Goldberg, The Atlantic A writer whose reflections are consistently as intellectually impressive as they are moving.--Cynthia Ozick Many of us assume that to be truly free, we must abandon the groups into which we were born and the identities we have inherited. But as Daniel Gordis demonstrates in his book, The Promise of Israel, the State of Israel's remarkable history is proof that identity and freedom can coexist, that it is identity that makes genuine freedom possible. A powerful and sure-to-be-controversial work, The Promise of Israel presents a dramatic new way of thinking about both the very purpose of Israel as well as about its contributions to human beings everywhere.--Natan Sharansky, former Soviet prisoner of conscience and human rights activist, current Chairman of the Executive of the Jewish Agency In this incredibly original and consistently provocative presentation, Daniel Gordis makes the case why Israel should and must matter to Jews and non-Jews alike, and to every country that aspires to prosperity and even more importantly, to freedom.--Joseph Telushkin, author of Jewish Literacy and A Code of Jewish Ethics This beautifully composed saga magnificently illustrates the historic truth that wherever Jews have gone in history, we have always followed our own way, forever belonging to and contributing mightily to world civilization and yet remaining distinct from it.--Yehuda Avner, author of The Prime Ministers
From the front Cover What Israel's critics in the West really object to is that it is a country expressly devoted to the future of a single people--the Jewish people. In an increasingly universal world, in which differences between cultures, religions, and national traditions are either denied or papered over, Israel's critics insist that there is something backward about a country devoted to the flourishing of a particular people. But they're wrong. Rather than relentlessly assailing Israel, Daniel Gordis argues, the international community should see Israel's model as key to the future of culture and freedom. The Promise of Israel makes and proves several audacious claims. Noting that Arabs in Israel serve on the Supreme Court and as government ministers and that Israel boasts more democratically elected Islamic officials than all of the other non-Islamic nations in the world combined, Gordis contends that this has been accomplished not in spite of Israel's commitment to the success of the Jewish people, but because of it. More surprisingly, Gordis insists that instead of being so commonly maligned, Israel ought to be seen as a beacon among nations, a remarkably successful state that has persevered despite its having been at war ever since it was established. Not only should other countries admire this model, they should emulate it. Gordis invites you to imagine how much freer, safer, and more prosperous Egyptians and Syrians would be if a deep-rooted reverence for their past and culture were combined with democratic freedoms and an abiding respect for minority rights. He argues persuasively that a people's awareness and love of its distinctive culture and unique history need not mire them in the past. It can gird them with the confidence that they have something unique to contribute to the world and with the guidance and direction they need to shape a better future. While The Promise of Israel may well be the most interesting and original book on Israel and the Middle East in years, it is also more than that. It offers the vision of a new and different approach to democracy and freedom for all of a nation's people--one that supports a strong cultural and religious center while protecting and supporting the beliefs and traditions of minorities. That is an export of which any nation would be proud.

Books similiar to The Promise of Israel: Why Its Seemingly Greatest Weakness Is Actually Its Greatest Strength

List of All Editions of The Promise of Israel: Why Its Seemingly Greatest Weakness Is Actually Its Greatest Strength