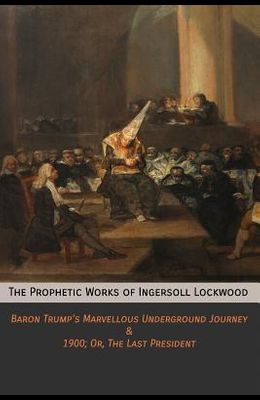 Printed with all original illustrations. Ingersoll Lockwood's two books, Baron Trump's Marvellous Underground Journey & 1900; Or, The Last President, have seen a resurgence in interest since Donald Trump's election to President of the United States in 2016. Both books were written before the turn of the 20th Century, but both contain eerie similarities with modern day political events. For the first time, both works are presented in a single volume so readers can decipher for themselves whether Lockwood's words were a telling of things to come, or just a curious coincidence of American literature. Lockwood's Baron Trump character shares a similar name to President Donald Trump's youngest son Barron Trump. Baron, in the novels written by Lockwood, is a wealthy young prince living in Castle Trump. He takes on magical adventures in a series of stories after Don, the master of masters, shows him a secret portal in Russia which leads to various enchanted worlds Baron goes on to explore. In 1900; Or, The Last President, Ingersoll Lockwood paints the picture of a politically charged New York City, where a political outsider has overcome stiff opposition to be elected President of the United States. Mob rule threatens, and marching protests rove up and down Fifth Avenue. The scene is an uncanny reflection of what happened as Donald Trump spent his days as President Elect holed up in Trump Tower on Fifth Avenue as he awaited his inauguration.

List of All Editions of The Prophetic Works of Ingersoll Lockwood: Baron Trump's Marvellous Underground Journey & 1900; Or, The Last President