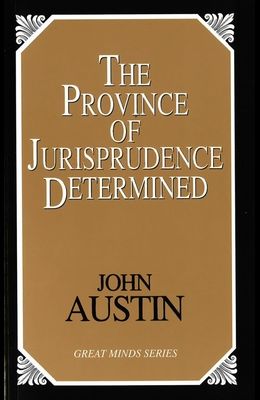 The Province of Jurisprudence Determined

A work that has had a profound influence on the study of English and American law, The Province of Jurisprudence Determined is a model of rigorous and clear analysis. With its publication Austin brought order to the disparate elements of a legal profession that up until his time was largely unsystematic. Although he was greatly respected by a small circle of supporters, including Jeremy Bentham and John Stuart Mill, his work received little attention beyond his friends during his lifetime. It was only after Austin's death that his writings began to attract general notice. Then his analysis became the focal point for strong disagreements over the true nature of law, the definition of law as a form of command with implied sanctions, and the problem of differentiating legal authority, political power, and morality. The later fame of his work appears to have resulted from the controversies it generated. Perhaps Austin's most significant contribution was to make a clear distinction between positive law (i.e., laws decreed by the sovereign or government) and moral principles (which he terms the law of God). In so doing he defined the field of inquiry for later students. Also of interest is the influence of utilitarian philosophy on his analysis: for example, he viewed the principle of social utility as a benchmark for discerning God's commands and hence for judging the overall moral quality of rules of conduct. Whether one agrees or disagrees with Austin's analysis, it is clear that his work is now established as indispensable for all discussions of jurisprudence.