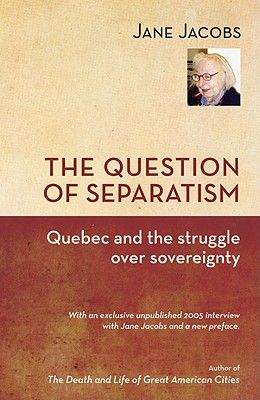 The Question of Separatism: Quebec and the Struggle Over Sovereignty

by
Jane Jacobs and Robin Philpot

In this, her third and least-known book, first published in 1980, Jane Jacobs examines not only the particular question of Quebec and Canada, but also the larger issue of sovereignty and autonomy in general. Using Norway as a model, Jacobs details that country's campaign of peaceful persistence that led to breaking ties with Swedenand suggests that Canada and Canadians should be inspired by the example. An essential component of Jacobs's urban activism, this new edition of the book incorporates and expands the 1979 Massey Lectures, Canadian Cities and Sovereignty-Association, commissioned by the Canadian Broadcasting Corporation (CBC). Also included is a previously unpublished exclusive interview with Jane Jacobs in her Toronto home in 2005, 25 years after the book appeared and 10 years after the 1995 Quebec referendum. In these musings, she reasserts and updates her thoughts on Separatismand addresses new issues such as tar sand development in Alberta, the finance of gambling, and the future of the Euro and of Europe.