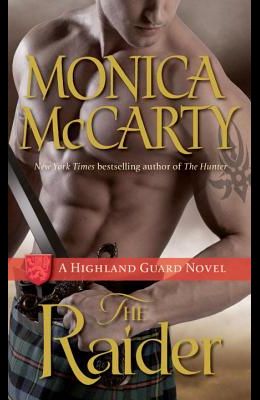 Book #8 in the Highland Guard Series
by
Monica McCarty

NATIONAL BESTSELLER After consolidating his gains against the enemy English, King Robert the Bruce of Scotland sends his best soldiers to fortify the lawless borders. These legendary warriors of the Highland Guard let nothing come before king and country--except the calling of their heart. Of all Bruce's elite warriors, Robert Raider Boyd is the most formidable. A true patriot whose bare hands are a deadly weapon, Robbie is the fierce enforcer of the Guard, and his hatred of the English has been honed to a razor-sharp edge. But vengeance proves bittersweet when his enemy's beautiful sister falls into his hands and he finds himself fighting temptation--a battle he badly wants to lose. Lady Rosalin Clifford barely recognizes the rebel prisoner she saved from execution six years ago. Though her girlish ideals for fairness have matured into a passion for justice, Rosalin believes she betrayed her brother when she helped this dangerous man escape. Now her traitorous act has come back to haunt her. But she can't deny the longing this tormented warrior ignites in her, or deny the passion that turns sworn enemies into lovers. Is the gentle love of a true English Rose enough to free Scotland's most brutal warrior from a path of vengeance--before it's too late? Praise for Monica McCarty and The Raider McCarty's latest Highland Guard novel is a deeply moving and delightful read . . . once again proving that McCarty is a master storyteller. -- RT Book Reviews Monica McCarty is an absolutely superior author Her Highland Guard series has to be one of the absolute best Highland series out there Fun, fast paced, fact driven and totally fantastic -- Bodice Rippers A powerful tale of love, woe, hardship and the power of true love . . . If you enjoy Scottish warriors, Medieval Scotland, romance, and passion, then you will enjoy The Raider . . . . A must-read -- My Book Addiction Reviews If you are a fan of historical romance, or any romance for that matter, you will want to not only read The Raider, but the entire Highland Guard series. It is just that good -- Coffee and Characters A stimulating romance with a rich historical setting, a conflict to put you on your toes, and a love story to pull at the heart strings . . . well done -- Addicted to Romance McCarty does a great job at bringing alive this tumultuous period in Scottish history and skillfully blending fact and fiction to create an unparalleled series. -- The Good, The Bad and The Unread McCarty is a master at writing Highlander romance . . . keeping her Highland Guard series fresh, with spectacularly riveting plots and fabulously romantic couples. . . . If you've not read this series yet, then I strongly suggest that you do. -- Night Owl Reviews , on The Hunter