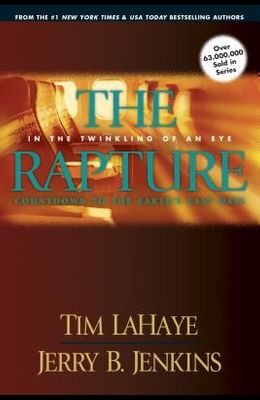 The Rapture: In the Twinkling of an Eye, Countdown to the Earth's Last Days

The stage is set as Nicolae Carpathia ruthlessly eliminates any obstacles in his rise to power. In the twinkling of an eye, loved ones disappear. Heaven rejoices as millions are welcomed into the unspeakable presence of God. The darkest days may lie ahead for those who have been left behind.

From the Back Cover Time seems to slow as the clock ticks down. . . . Pan-Con Airlines captain Rayford Steele prepares for a flight to London with beautiful flight attendant Hattie Durham. Because of his wife's newfound faith, Rayford looks forward to time-and the possibilities-with Hattie. Journalist Cameron Buck Williams is in Israel when the Russians attack and experiences for himself the miraculous deliverance of the Holy Land. Buck cannot deny Chicago bureau chief Lucinda Washington's insistence that the event was prophesied in Scripture, though he dares not consider the personal ramifications. Meanwhile, Nicolae Carpathia eliminates any obstacles in his path to power. As the newly appointed president of Romania, Nicolae is invited to speak before the U.N. Without warning, millions disappear and are welcomed into the unspeakable presence of God. On earth some realize what has happened . . . what they've lost . . . what they've missed. And the darkest days lie ahead for those left behind.

Before They Were Left Behind Series In Order - By Tim LaHaye