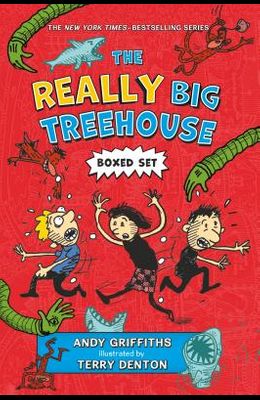 Book #1-3 in the Treehouse Series
by
Andy Griffiths and Terry Denton
$23.97
Select Format

From New York Times -bestselling author Andy Griffiths, this paperback boxed set includes the first three books in the hilarious Treehouse chapter book series, full of zany illustrations and slapstick humor. Andy and Terry live in a treehouse. But it's not just any old treehouse, it's the most amazing treehouse in the world This treehouse starts with thirteen stories, a bowling alley, a see-through swimming pool, and a secret underground laboratory. And it keeps getting bigger Soon the treehouse has twenty-six stories, then thirty-nine as Andy and Terry keep adding more levels and rooms, including a skate ramp, anti-gravity chamber, an active volcano, a chocolate waterfall and more This boxed set includes The 13-Story Treehouse , The 26-Story Treehouse , and The 39-Story Treehouse . The 13-Story Treehouse Anarchic absurdity at its best. -- Publishers Weekly , starred review Will appeal to fans of Jeff Kinney and Dav Pilkey. . . . The wonderfully random slapstick humor is tailor-made for reluctant readers... A treat for all. -- Booklist

List of All Editions of The Really Big Treehouse Boxed Set