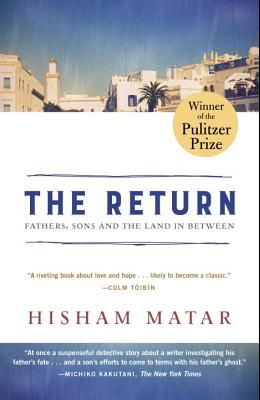 The Return (Pulitzer Prize Winner): Fathers, Sons and the Land in Between

WINNER OF THE PULITZER PRIZE - The acclaimed memoir about fathers and sons, a legacy of loss, and, ultimately, healing--one of The New York Times Book Review 's ten best books of the year, winner of the PEN/Jean Stein Book Award, and a finalist for the National Book Critics Circle Award and the Los Angeles Times Book Prize When Hisham Matar was a nineteen-year-old university student in England, his father went missing under mysterious circumstances. Hisham would never see him again, but he never gave up hope that his father might still be alive. Twenty-two years later, he returned to his native Libya in search of the truth behind his father's disappearance. The Return is the story of what he found there. The Pulitzer Prize citation hailed The Return as a first-person elegy for home and father. Transforming his personal quest for answers into a brilliantly told universal tale of hope and resilience, Matar has given us an unforgettable work with a powerful human question at its core: How does one go on living in the face of unthinkable loss? NAMED ONE OF THE BEST BOOKS OF THE YEAR BY Michiko Kakutani, The New York Times - The Washington Post - The Guardian - Financial Times A tale of mighty love, loyalty and courage. It simply must be read. -- The Spectator (U.K.) Wise and agonizing and thrilling to read. --Zadie Smith An] eloquent memoir . . . at once a suspenseful detective story about a writer investigating his father's fate . . . and a son's efforts to come to terms with his father's ghost, who has haunted more than half his life by his absence. --Michiko Kakutani, The New York Times This outstanding book . . . roves back and forth in time with a freedom that conceals the intricate precision of its art. -- The Wall Street Journal Truly remarkable . . . a book with a profound faith in the consolations of storytelling . . . a testament to Matar's] father, his family and his country. -- The Daily Telegraph (U.K.) The Return is a riveting book about love and hope, but it is also a moving meditation on grief and loss. . . . Likely to become a classic. --Colm T ib n Matar's evocative writing and his early traumas call to mind Vladimir Nabokov. --The Washington Post Utterly riveting. -- The Boston Globe A moving, unflinching memoir of a family torn apart. --Kazuo Ishiguro, The Guardian Beautiful . . . The Return, for all the questions it cannot answer, leaves a deep emotional imprint. -- Newsday A masterful memoir, a searing meditation on loss, exile, grief, guilt, belonging, and above all, family. It is, as well, a study of the shaping--and breaking--of the bonds between fathers and sons. . . . This is writing of the highest quality. -- The Sunday Times (U.K.)