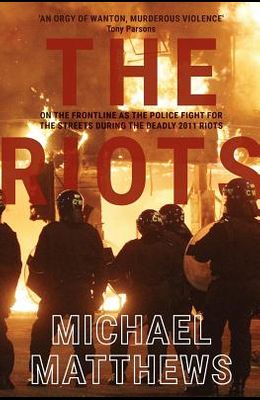 The Riots: The police fight for the streets during the UK's deadly 2011 riots

'An orgy of wanton, murderous violence' Tony Parsons 'Britain's worst unrest for two decades' New York Times In August 2011 the shooting of Mark Duggan by the police sparked an explosion of rioting and lawlessness across the UK. Mobs went on the rampage and terrifying scenes of destruction and violence unfolded. Homes and businesses were burnt to the ground, thousands were arrested, many hundreds were injured and five people were killed. The Riots is the untold story of what police officers on the front line experienced over those feverish days and nights as they battled to regain control of Britain's streets. Drawn from interviews with dozens of officers who have never spoken publicly before, this is a terrifying account of how the disorder spread through the country and how the police fought back while under attack from rioters armed with bricks, petrol bombs, knives and guns. The Riots is full of the kind of heroism we are used to seeing in war and features stories of astonishing bravery from the lethal frontline of British policing. It is as thrilling, controversial and important as real-life stories can get.