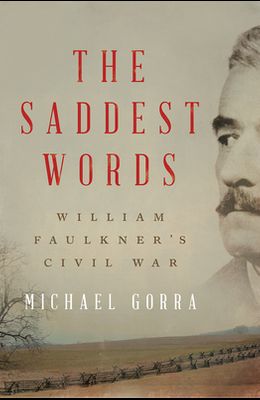 William Faulkner, one of America's most iconic writers, is an author who defies easy interpretation. Born in 1897 in Mississippi, Faulkner wrote such classic novels as Absolom, Absolom and The Sound and The Fury , creating in Yoknapatawpha county one of the most memorable gallery of characters ever assembled in American literature. Yet, as acclaimed literary critic Michael Gorra explains, Faulkner has sustained justified criticism for his failures of racial nuance--his ventriloquism of black characters and his rendering of race relations in a largely unreconstructed South--demanding that we reevaluate the Nobel laureate's life and legacy in the twenty-first century, as we reexamine the junctures of race and literature in works that once rested firmly in the American canon. Interweaving biography, literary criticism, and rich travelogue, The Saddest Words argues that even despite these contradictions--and perhaps because of them--William Faulkner still needs to be read, and even more, remains central to understanding the contradictions inherent in the American experience itself. Evoking Faulkner's biography and his literary characters, Gorra illuminates what Faulkner maintained was the South's curse and its separate destiny, a class and racial system built on slavery that was devastated during the Civil War and was reimagined thereafter through the South's revanchism. Driven by currents of violence, a Lost Cause romanticism not only defined Faulkner's twentieth century but now even our own age. Through Gorra's critical lens, Faulkner's mythic Yoknapatawpha County comes alive as his imagined land finds itself entwined in America's history, the characters wrestling with the ghosts of a past that refuses to stay buried, stuck in an unending cycle between those two saddest words, was and again. Upending previous critical traditions, The Saddest Words returns Faulkner to his sociopolitical context, revealing the civil war within him and proving that the real war lies not only in the physical combat, but also in the war after the war, the war over its memory and meaning. Filled with vignettes of Civil War battles and generals, vivid scenes from Gorra's travels through the South--including Faulkner's Oxford, Mississippi--and commentaries on Faulkner's fiction, The Saddest Words is a mesmerizing work of literary thought that recontextualizes Faulkner in light of the most plangent cultural issues facing America today.