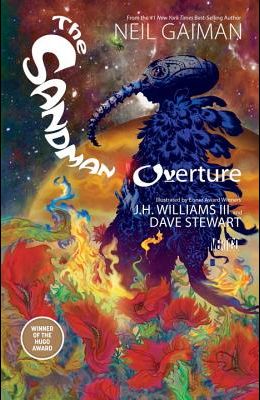 #1 New York Times bestseller Winner of the 2016 Hugo Award for Best Graphic Story Twenty-five years since The Sandman first changed the landscape of modern comics, Neil Gaiman's legendary series is back in this never-before-told tale featuring Morpheus The Sandman: Overture heralds New York Times best-selling writer Neil Gaiman's return to the art form that made him famous, ably abetted by artistic luminary JH Williams III ( Batwoman, Promethea ), whose lush, widescreen images provide an epic scope to The Sandman's origin story. From the birth of a galaxy to the moment that Morpheus is captured, The Sandman: Overture will feature cameo appearances by fan-favorite characters such as The Corinthian, Merv Pumpkinhead and, of course, the Dream King's siblings: Death, Desire, Despair, Delirium, Destruction and Destiny.

The Sandman Series In Order - By Neil Gaiman