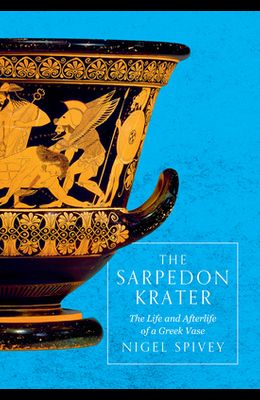 The Sarpedon Krater: The Life and Afterlife of a Greek Vase

Perhaps the most spectacular of all Greek vases, the Sarpedon krater depicts the body of Sarpedon, a hero of the Trojan War, being carried away to his homeland for burial. It was decorated some 2,500 years ago by Athenian artist Euphronios, and its subsequent history involves tomb raiding, intrigue, duplicity, litigation, international outrage, and possibly even homicide. How this came about is told by Nigel Spivey in a concise, stylish book that braids together the creation and adventures of this extraordinary object with an exploration of its abiding influence. Spivey takes the reader on a dramatic journey, beginning with the krater's looting from an Etruscan tomb in 1971 and its acquisition by the Metropolitan Museum of Art, New York, followed by a high-profile lawsuit over its status and its eventual return to Italy. He explains where, how, and why the vase was produced, retrieving what we know about the life and legend of Sarpedon. Spivey also pursues the figural motif of the slain Sarpedon portrayed on the vase and traces how this motif became a standard way of representing the dead and dying in Western art, especially during the Renaissance. Fascinating and informative, The Sarpedon Krater is a multifaceted introduction to the enduring influence of Greek art on the world.