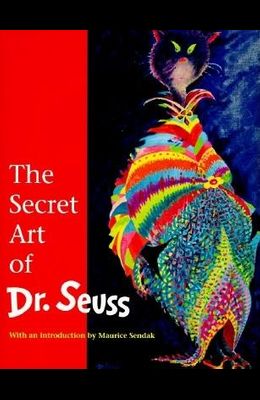 The Secret Art of Dr. Seuss

These fabulous, whimsical paintings, created for his own pleasure and never shown to the public, show Geisel (a.k.a. Dr. Seuss) in a whole new light. Depicting outlandish creatures in otherworldly settings, the paintings use a dazzling rainbow of hues not seen in the primary-color palette of his books for children, and exhibit a sophisticated and often quite unrestrained side of the artist. 65 color illustrations.

From the Back Cover If you've ever read Oh, the Places You'll Go!, The Cat in the Hat, Horton Hears a Who, or any of the dozens of books written and illustrated by Theodor Geisel, you may think you're familiar with the work of the man who delighted millions as Dr. Seuss. But the wildly imaginative creations collected in these pages show a previously unseen dimension of Geisel's art. These fabulous and whimsical paintings, created for his own pleasure and never before shown to the public, will enchant and amaze you. These fantastical images have the inimitable style of Geisel's alter ego Dr. Seuss, frequently depicting outlandish creatures in otherworldly settings. The puckish Seuss humor is in evidence, as well as the insight that often gave his stories deeper meaning. But these paintings break new ground, using a dazzling rainbow of hues not seen in the primary-color palette of Geisel's books for children. The Secret Art of Dr. Seuss exhibits a sophisticated, technically accomplished, and often quite unrestrained side of Geisel's talent. As his widow, Audrey Geisel, writes in her eloquent note to the collection: I remember telling Ted that there would come a day when many of his paintings would be seen and he would thus share with his fans another facet of himself - his private self. That day has come.

List of All Editions of The Secret Art of Dr. Seuss