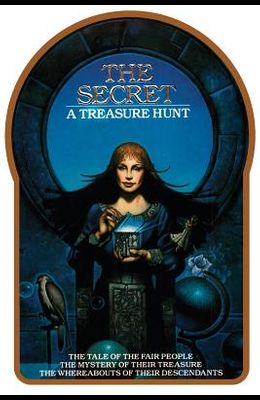 by
Byron Preiss and Ted Mann and Sean Kelly

The tale begins over three-hundred years ago, when the Fair People--the goblins, fairies, dragons, and other fabled and fantastic creatures of a dozen lands--fled the Old World for the New, seeking haven from the ways of Man. With them came their precious jewels: diamonds, rubies, emeralds, pearls... But then the Fair People vanished, taking with them their twelve fabulous treasures. And they remained hidden until now... Across North America, these twelve treasures, over ten-thousand dollars in precious jewels in 1982 dollars, are buried. The key to finding each can be found within the twelve full-color paintings and verses of THE SECRET. Are you smart enough? THE SECRET: A TREASURE HUNT was published in 1982. The year before publication, the author and publisher Byron Preiss had traveled to 12 locations in the continental U.S. (and possibly Canada) to secretly bury a dozen ceramic casques. Each casque contained a small key that could be redeemed for one of 12 jewels Preiss kept in a safe deposit box in New York. The key to finding the casques was to match one of 12 paintings to one of 12 poetic verses, solve the resulting riddle, and start digging. Since 1982, only three of the 12 casques have been recovered. The first was located in Grant Park, Chicago, in 1984 by a group of students. The second was unearthed in 2004 in Cleveland by two members of the Quest4Treasure forum, and the third was found in Boston in 2019 by a father and his two children. Preiss was killed in an auto accident in the summer of 2005, but the hunt for his casques continues.