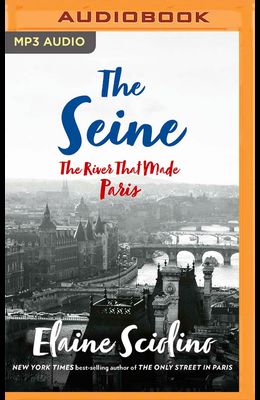 The Seine: The River That Made Paris

A vibrant, enchanting tour of the Seine from longtime New York Times foreign correspondent and best-selling author Elaine Sciolino. Elaine Sciolino came to Paris as a young foreign correspondent and was seduced by a river. In The Seine , she tells the story of that river from its source on a remote plateau of Burgundy to the wide estuary where its waters meet the sea, and the cities, tributaries, islands, ports, and bridges in between. Sciolino explores the Seine through its rich history and lively characters: a bargewoman, a riverbank bookseller, a houseboat dweller, a famous cinematographer known for capturing the river's light. She discovers the story of Sequana - the Gallo-Roman healing goddess who gave the Seine its name - and follows the river through Paris, where it determined the city's destiny and now snakes through all aspects of daily life. She patrols with river police, rows with a restorer of antique boats, sips champagne at a vineyard along the river, and even dares to go for a swim. She finds the Seine in art, literature, music, and movies from Renoir and Les Mis rables to Puccini and La La Land . Along the way, she reveals how the river that created Paris has touched her own life. A powerful afterword tells the dramatic story of how water from the depths of the Seine saved Notre-Dame from destruction during the devastating fire in April 2019. A storyteller at heart (June Sawyers, Chicago Tribune ) with a sumptuous eye for detail (Sinclair McKay, Daily Telegraph ), Sciolino braids memoir, travelogue, and history through the Seine's winding route. The Seine offers a love letter to Paris and the most romantic river in the world, and invites listeners to explore its magic for themselves.