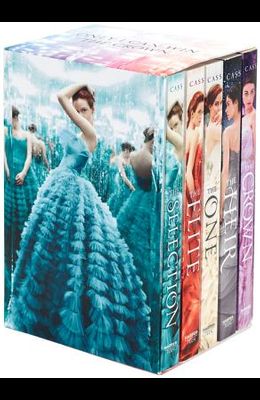 All five novels in Kiera Cass's #1 New York Times bestselling Selection series--now available in one beautiful box set For thirty-five girls, the Selection is the chance of a lifetime. The chance to live in a palace and compete for the heart of gorgeous Prince Maxon. But for America Singer, being Selected is a nightmare. It means turning her back on her secret love with Aspen, who is a caste below her, and leaving her home to enter a fierce competition for a crown she doesn't want. Then America meets Prince Maxon. Gradually, she starts to question all the plans she's made for herself--and realizes that the life she's always dreamed of may not compare to a future she never imagined. In The Heir and The Crown , Princess Eadlyn becomes the first ever princess to hold a Selection of her own--but she doesn't believe that any of her thirty-five suitors will capture her heart... This gorgeous box set includes all five books in this #1 New York Times bestselling series, which has sold millions of copies and captured the hearts of readers around the world. Don't miss The Betrothed, a glittering royal romance sure to captivate Kiera Cass's legion of loyal readers and lovers of courtly intrigue alike

List of All Editions of The Selection 5-Book Box Set: The Complete Series