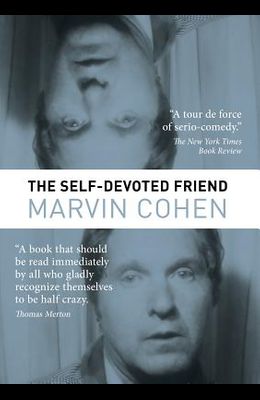 50th-anniversary edition of critically acclaimed writer Marvin Cohen's debut fiction. Not quite a novel, the book is best described as a series of humorous philosophical dialogues between the narrator and his other self, touching on a vast array of subjects such as birth, love, art, nature, religion, death, and everything in between. A mere 1,500 hardcover copies of The Self-Devoted Friend were printed in London by publisher Rapp & Carroll Limited in 1967, 750 of which were imported by New Directions Publishing for distribution in the United States. According to Cohen, New Directions publisher James Laughlin explained his decision behind the very limited edition by saying it was only for the happy few. Despite its overwhelmingly positive critical reception, no further copies of the book were ever produced. Completely reformatted, this new paperback edition contains the full text of the original and the author has also written a new brief introduction. When I was an unpublished writer 55 years ago, I lived in the same crummy tenement as Marvin Cohen in New York, and got to know him and his extraordinary writing. To me he was the Beckett of Avenue B -- funnier, more accessible, but just as determined to show us the world in a new way. Cohen is the chronicler of frustration, and The Self-Devoted Friend is just one of his masterpieces. Paul Theroux It is rare these days -- perhaps, any days -- to come across a work that not only reveals a striking, fresh talent, but stands outside current literary preoccupations. What Mr. Cohen has is his own: a joy in language, and an eye, at once innocent and shrewd, for the paradoxes inherent in the human condition. He puts both language and people through their paces, stands them on their heads, and hugs them to his heart in what amounts as a tour de force of serio-comedy, a sort of superb clowning in which pathos and absurdity intertwine as they do in a Charlie Chaplin film. The New York Times Book Review Cohen surrealistically juxtaposes ideas, seeks irrational and fantastic links, but for the high purposes of verbal comedy and linguistic entertainment. The New Statesman (London) Marvin Cohen's wacky humor has something of Thurber, something of Steinberg, Buster Keaton, the surrealists, the pataphysicians. The Self-Devoted Friend is a book that should be read immediately by all who gladly recognize themselves to be half crazy. Thomas Merton Such discontinuous fictions as Finnegans Wake or Naked Lunch or Marvin Cohen's The Self-Devoted Friend would store more suitably than nineteenth-century novels. Richard Kostelanetz