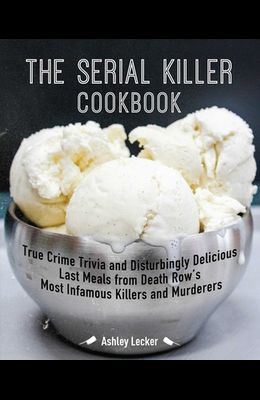 Bring your love of true crime into the kitchen with meals ranging from the bizarre (a single unpitted black olive) to the gluttonous (a dozen deep-fried shrimp, a bucket of fried chicken, French fries, and a pound of strawberries), inspired by Ted Bundy, John Wayne Gacy, and other notorious death row inmates. The perfect gift for murderinos and true crime fans, The Serial Killer Cookbook Last Meals pairs serial killer trivia with the recipes of the meals these killers ate during their final hours. With full-color photos, chilling true crime facts, and easy-to-follow steps, you'll be cooking up killer meals in no time. This collection of recipes is both delicious and surprising, and spans breakfast staples to indulgent desserts, including: Honey Buns (eaten by Douglas Wright, murderer) Seared Steak, Hash Browns, Toast, and Fried Eggs (given to but not eaten by Ted Bundy, serial killer) Chicken Parmesan and Alfredo Pasta (eaten by Ruth Snyder, murderer) Justice, Equality, and World Peace (eaten by Odell Barnes, murderer) Mac and Cheese (eaten by Gustavo Julian Garcia, murderer) Peach Cobbler (eaten by Terry Douglas Clark, murderer) And much more