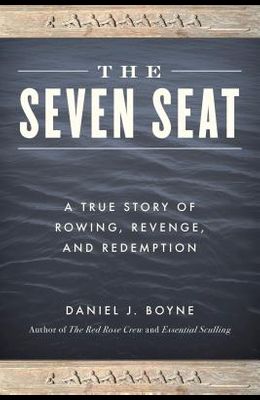 The Seven Seat: A True Story of Rowing, Revenge, and Redemption

Harvard University rowing coach and long-time luminary in crew, Dan Boyne tells a tale in The Seven Seat of redemption and revenge against a rival who had bullied him throughout high school. For Dan, this teenage torture came at the hands of a loud-mouthed wrestler named Samuel Caluso. After being accepted at Trinity College in Hartford, CT, Dan took up crew. His arch-nemesis, Caluso, who had applied to Trinity as his first choice but didn't get in, went off to the Coast Guard Academy, where he also began to row. Halfway into his freshman year, Dan encountered a strange twist of fate. It turned out that Trinity and Coast Guard were archrivals and would face off in a dual race to lead off the spring season, as well as at the year-end National Championships. As the spring approached, Dan's final fears were realized when he discovered that his high school bully was rowing in the very same position in the boat--the seven seat. In rowing, when you lose a race, you have to remove your shirt and surrender it to your opponent. Would Dan finally get his revenge on Samuel Caluso, or would he once again be shorn of his pride?