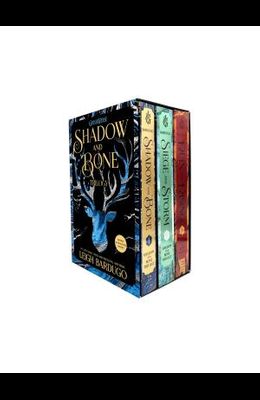 All three books in the New York Times -bestselling Shadow and Bone Trilogy are now available together in a beautiful paperback box set that includes a collectible poster-sized map of Leigh Bardugo's Grishaverse. Soldier. Summoner. Saint. Follow Alina Starkov through Shadow and Bone , Siege and Storm , and Ruin and Rising as she discovers her dormant powers and is swept up in a world of luxury and illusion. As Alina struggles to fit into her new life, a threat to the kingdom of Ravka grows--one that will test old alliances and challenge the very limits of magic, one that will forge a leader from a frightened girl. Praise for The Shadow and Bone Trilogy: This is what fantasy is for. --Laini Taylor for The New York Times on Shadow and Bone Set in a fascinating, unique world rich with detail , Shadow and Bone was unlike anything I've ever read . Alina is a clever, sympathetic character I will gladly follow into the next installment--which can't come soon enough --Veronica Roth, New York Times -bestselling author of Divergent, on Shadow and Bone Filled with lush descriptions, intriguing magic, and plenty of twists , this memorable adventure offers action and intrigue mixed with an undercurrent of romance and danger. -- Publishers Weekly on Shadow and Bone A heady blend of fantasy, romance, and adventure . -- Rick Riordan, #1 New York Times - bestselling author of the Percy Jackson series, on Siege and Storm A well-drawn world, full of deceit and mythology, populated by entirely believable characters. Full of truly surprising twists and turns, beautiful imagery and a protagonist it's impossible not to root for , this is a great choice for teenage fans of George R.R. Martin and J.R.R. Tolkien. -- RT Book Reviews on Shadow and Bone If opener Shadow and Bone was a magical coming-of-age story and middle-volume Siege and Storm was a political thriller, then this third book is an epic quest . . . Every time readers may think she's written herself into a corner, Bardugo pulls off a twist that, while surprising, will keep them turning pages furiously . -- Kirkus Reviews , starred review, on Ruin and Rising