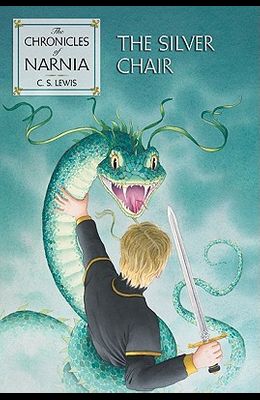 A beautiful paperback edition of The Silver Chair , book six in the classic fantasy series, The Chronicles of Narnia , featuring cover art by three time Caldecott Medal-winning illustrator, David Wiesner, and black-and-white interior illustrations by the original illustrator of Narnia, Pauline Baynes. Through dangers untold and caverns deep and dark, a noble band of friends is sent to rescue a prince held captive. But their mission to Underland brings them face-to-face with an evil more beautiful and more deadly than they ever expected. The Silver Chair is the sixth book in C. S. Lewis's classic fantasy series, which has been drawing readers of all ages into a magical land with unforgettable characters for over sixty years. This is a complete stand-alone read, but if you want to go farther into this magical land, read The Last Battle , the seventh and concluding book in The Chronicles of Narnia .

From the Back Cover Narnia ... where owls are wise, where some of the giants like to snack on humans, where a prince is put under an evil spell ... and where the adventure begins. Eustace and Jill escape from the bullies at school through a strange door in the wall, which, for once, is unlocked. It leads to the open moor . . . or does it? Once again Aslan has a task for the children, and Narnia needs them. Through dangers untold and caverns deep and dark, they pursue the quest that brings them face to face with the evil Witch. She must be defeated if Prince Rilian is to be saved.