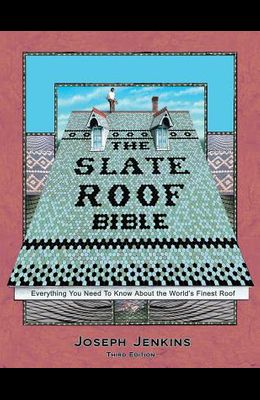 The Slate Roof Bible: Everything You Need to Know about the World's Finest Roof, 3rd Edition

Joseph Jenkins climbed on his first slate roof in 1968, authored the first edition of The Slate Roof Bible in 1997, and published the second edition in 2003. Both editions received national awards. Now, a dozen years later, Jenkins is still very active in the slate roofing industry. The third edition of the book reflects more than a decade of additional experience being passed on to the reader by the man who is arguably the foremost expert on slate roofs in the United States today. The third edition, hardbound, completely updates and expands the material in the second edition, with more emphasis on the craft of slate roof installation. Expanded sections include slate siding, eyebrow dormers, turrets, soldering, flashings, international slate, American slate history, slating styles, installation and repair tips, and trade secrets. Dozens of new color photographs have been added, as well as step-by-step illustrations and line drawings. This book is sure to become a classic. It belongs on the shelf of every architect, roofer, slate roof owner, architectural consultant, history buff, and anyone in the roofing industry.