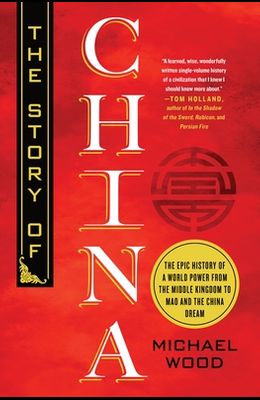 The Story of China: The Epic History of a World Power from the Middle Kingdom to Mao and the China Dream

A single volume history of China, offering a look into the past of the global superpower and its significance today. Michael Wood has travelled the length and breadth of China producing a magisterial new book that combines a sweeping narrative of China's story with the stories of its people, the history of its landscape and commentary from his extensive travel journals. He begins with a look at China's prehistory--the early dynasties, the origins of the Chinese state, and the roots of Chinese culture in the teachings of Confucius. He looks at particular periods and themes that are being revaluated by historians now such as The Renaissance of the Song with its brilliant scientific discoveries. He offers a revaluation of the Qing Empire in the 18th century, just before the European impact, a time when China's rich and diverse culture was at its height. Wood takes a new look at the encounter with the West, the Opium Wars, clashes with the British and the extraordinarily rich debates in the late 19th century as to which path China should take to move forward into modernity. Finally, he brings the story up to today by giving readers a clear, current account of China post 1949 complete with a more balanced view of Mao based on newly-opened archives. In the final chapter, Wood considers the provocative question of when, if ever, China will rule the world. Michael Wood's The Story of China answers that question and is the indispensable book about the most intriguing and powerful country amassing power on the world stage today.

List of All Editions of The Story of China: The Epic History of a World Power from the Middle Kingdom to Mao and the China Dream