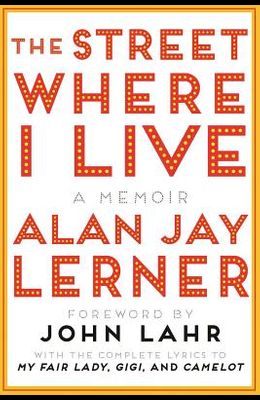 The Street Where I Live: A Memoir

This is a highly personal biography of three great shows: My Fair Lady, Camelot, and Gigi. Warm, witty, loving, often hilarious, and poignant in its affection for a glorious era in the American theater, it is the story of what Mr. Lerner calls the sundown of wit, eccentricity, and glamour. The author himself, try as he will to keep himself out of his pages, emerges not merely as a great talent, but as a man of laughter and love. His principals, however, are Moss Hart and Fritz Loewe, with a stupendous supporting cast: Julia Andrews, Richard Burton, Rex Harrison, Cecil Beaton, Louis Jourdan, Maurice Chevalier, Leslie Caron, Vincente Minnelli, Arthur Freed . . . and on an on. They are seen intimately in moments of triumph, disaster, doubt and panic, pettishness and hilarity. Sometimes they were amateurs at private living, but they were always professionals at the creation of theater. And the creation of theater is the matrix of this wonderful book. Here is how a show is conceived, financed, written (and rewritten and rewritten), produced, staged, saved, and finally given to the public.

Frequently Asked Questions About The Street Where I Live: A Memoir

Books like The Street Where I Live: A Memoir

0
|   0  reviews
Did you read The Street Where I Live: A Memoir? Please provide your feedback and rating to help other readers.
Write Review

List of All Editions of The Street Where I Live: A Memoir