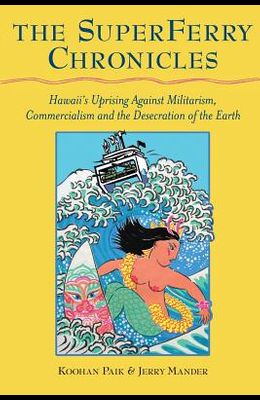 The Superferry Chronicles: Hawaii's Uprising Against Militarism, Commercialism, and the Desecration of the Earth

Fifteen hundred protestors line Kaua'i's pier. Dozens more leap onto surfboards, boogie boards, and canoes, risking their lives to stop the oncoming colossus: the high-speed Hawaii Superferry riding in on a wave of deception and collusion. The protesters block the ship, and force it back to Honolulu. But why such outrage?... Over a ferryboat? The Superferry Chronicles is a riveting tale of intrigue and corruption-and an inspiring popular uprising against rampant commercialization. Impeccably researched, The Chronicles exposes hidden connections to defense industries preparing for Pacific conflicts, and an ambitious governor pandering to powerful military investors. Her administration gives the mammoth catamaran-bigger than a football field-a free pass to blaze its way at 40 miles per hour through protected whale breeding grounds and transport dangerous invasive species to fragile ecosystems-despite stringent environmental laws and a unanimous Supreme Court stop-order. Central to the story, we hear directly from Hawaii's citizens fighting to protect their lands, and saying loud and clear, Enough is enough. Award-winning filmmaker Koohan Paik of Kaua'i and Jerry Mander , the patriarch of the antiglobalization movement (New York Times), are joined by military observers, legal experts, and environmental professionals, to tell this compelling David-and-Goliath saga of local heroism versus global powers, exposing universal crises playing out in a Pacific archipelago. Open this book and dive into a story of almost allegoric proportions. Let it embolden you to stand up for our Earth, its beauty and its creatures, including ourselves. -Frances Moore Lappe, author of Diet for a Small Planet and Hope's Edge The idea of boats to connect the Hawaiian Islands is so natural and lovely that it makes one doubly mad to read how in this case it's been perverted into yet one more sad scheme for our paranoid future. Good for you-people of Hawaii-who've raised the alarm, and to these authors for pulling back the curtain.-Bill McKibben, author of Deep Economy I applaud the authors for bringing the voices of the grassroots to the foreground. The people make history, and the people of Kaua'i have made us proud. Kauli'i makou, nui ke aloha no ka 'aina. ('We are small in numbers, but our love for our land is great.') -Ikaika Hussey, Publisher The Hawai'i Independent In every era, simple events become symbols of greater forces that shape human history. The Superferry Chronicles brings one such moment alive. This book captures the spirit of that defining event and reveals the corporate manipulation, political bullying, corruption, and deceit that lay behind the Hawaii Superferry.-Lucienne de Naie, Chair, Sierra Club Hawaii Koohan Paik and Jerry Mander offer the world a wide interpretation of indigenous sensibility. We in Hawaii are grateful and stand ready for more effective collaboration. It's time to save this planet I mua ka lahui o Hawaii-nui-akua. ('Let us all move forward, all people of the world.') -Dr. Manulani Aluli Meyer, Hawaiian practitioner and educator

List of All Editions of The Superferry Chronicles: Hawaii's Uprising Against Militarism, Commercialism, and the Desecration of the Earth