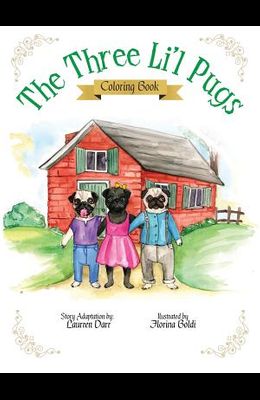 Benji the pug builds a house of straw, but a wolf comes along and blows it in. Benji's sister, Inky, makes her home of sticks, but the wolf blows that in, too. When the wolf can't huff and puff and blow in the brick house of their brother, Sarge, he has to figure out another way to make a meal of the three little pugs. What he finds out is that you don't mess with these wily pups, as they will dream up all kinds of ways to protect themselves-and each other-from this treacherous canine. Learn how this unfolds in this imaginative retelling of The Three Little Pigs. Adapted by Laurren Darr, and featuring illustrations by Florina Boldi that have been converted to coloring book style, this is a story of love, family and the ultimate triumph of brain over brawn. About The Author: Laurren Darr has been 'owned' by pugs since her first pug rescue of White Pines Tuttie when she was just six years old. Tuttie had never been out of a cage or even uttered a bark. She was the joy of Laurren's life until she left this world at the age of 15 (human years, of course ). This silly pug would let Laurren dress her, put clippy earrings on her, and even put lipstick on her. They'd spend hours tootling around the neighborhood dressed in their Sunday best, which is why Tuttie served as the inspiration for the launch of the International Association of Pet Fashion Professionals over thirty years later. Laurren has had many pugs since. Zacchaeus was a gift to her for her 16th birthday. She has also featured family rescue pugs Inky & Sarge (brother and sister) and Benji, in her Pug Fairy Tale Series story adaptations. Her busy Chicago-area home is filled with her husband, her son, a fabulously fashionable pug named Bella and a blue and gold macaw, Kao.

List of All Editions of The Three Li'l Pugs - Coloring Book