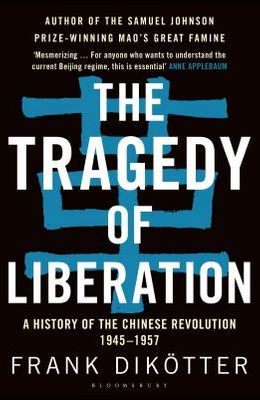 The Tragedy of Liberation: A History of the Chinese Revolution 1945-1957

A groundbreaking chronicle of the violent early years of the People's Republic of China by the author of the BBC Samuel Johnson Prize-winning Mao's Great Famine . The Chinese Communist party refers to its victory in 1949 as a 'liberation.' In China the story of liberation and the revolution that followed is not one of peace, liberty, and justice. It is first and foremost a story of calculated terror and systematic violence. So begins Frank Dik tter's stunning and revelatory chronicle of Mao Zedong's ascension and campaign to transform the Chinese into what the party called New People. Following the defeat of Chiang Kai-shek in 1949, after a bloody civil war, Mao hoisted the red flag over Beijing's Forbidden City, and the world watched as the Communist revolution began to wash away the old order. Due to the secrecy surrounding the country's records, little has been known before now about the eight years that followed, preceding the massive famine and Great Leap Forward. Drawing on hundreds of previously classified documents, secret police reports, unexpurgated versions of leadership speeches, eyewitness accounts of those who survived, and more, The Tragedy of Liberation bears witness to a shocking, largely untold history. Interweaving stories of ordinary citizens with tales of the brutal politics of Mao's court, Frank Dik tter illuminates those who shaped the liberation and the horrific policies they implemented in the name of progress. People of all walks of life were caught up in the tragedy that unfolded, and whether or not they supported the revolution, all of them were asked to write confessions, denounce their friends, and answer queries about their political reliability. One victim of thought reform called it a carefully cultivated Auschwitz of the mind. Told with great narrative sweep, The Tragedy of Liberation is a powerful and important document giving voice at last to the millions who were lost, and casting new light on the foundations of one of the most powerful regimes of the twenty-first century.

Books like The Tragedy of Liberation: A History of the Chinese Revolution 1945-1957

List of All Editions of The Tragedy of Liberation: A History of the Chinese Revolution 1945-1957