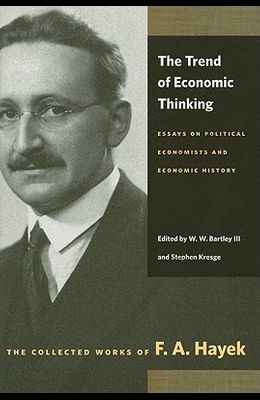 The Trend of Economic Thinking: Essays on Political Economists and Economic History

by
F A Hayek and W W Bartley III

In The Trend of Economic Thinking Hayek presents many of the figures that influenced the development of his economic thought. The articles range from well-known economists such as Mandeville, Hume, Smith, and Bastiat, to lesser-known figures such as Dupuit and Gossen, showing the breadth of Hayek's study of the history of economic thought. F. A. Hayek (1899-1992), recipient of the Medal of Freedom in 1991 and co-winner of the Nobel Memorial Prize in Economic Sciences in 1974, was a pioneer in monetary theory and one of the principal proponents of classical liberal thought in the twentieth century. He taught at the London School of Economics, the University of Chicago, and the University of Freiburg. W. W. Bartley, III (1934-1990) was a Professor of Philosophy and a Senior Research Fellow at Stanford University and an author.

From the Back Cover This book captures Hayek's views on political economists and economic history- on Mandeville, Hume, Cantillon, Smith, and Thornton. Framed by insightful editorial notes, fifteen newly collected essays provide a fascinating introduction to the historical context of political economy and the evolution of monetary practices.