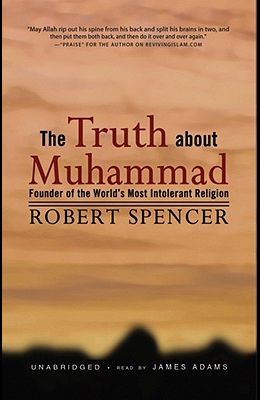 The Truth about Muhammad: Founder of the World's Most Intolerant Religion

In The Truth about Muhammad, New York Times bestselling author and Islam expert Robert Spencer offers a telling portrait of the founder of Islam--perhaps the first such portrait in half a century--unbounded by fear and political correctness, unflinching, and willing to face the hard facts about Muhammad's life that continue to affect our world today. Spencer details Muhammad's development from a preacher of hellfire and damnation into a political and military leader who expanded his rule by force of arms, promising his warriors luridly physical delights in paradise if they were killed in his cause. He explains how the Qur'an's teachings on warfare against unbelievers developed, with constant war to establish the hegemony of Islamic law as the last stage. Spencer also gives the truth about Muhammad's convenient revelations justifying his own licentiousness; his joy in the brutal murders of his enemies; and above all, his clear marching orders to his followers to convert non-Muslims to Islam--or force them to live as inferiors under Islamic rule.

Books similiar to The Truth about Muhammad: Founder of the World's Most Intolerant Religion

List of All Editions of The Truth about Muhammad: Founder of the World's Most Intolerant Religion