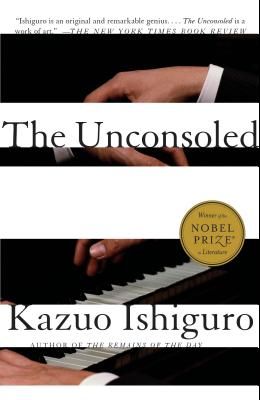 Only the Booker Prize-winning author of The Remains of the Day could have created this daring and stunningly inventive new novel. The Unconsoled gives readers what is at once a riveting psychological mystery, an acute satire of the cult of art, and a poignant character study of a man whose public self has taken on a life of its own. Ishiguro writes with his characteristic grace and off-beat pungency.--Los Angeles Times.

From the front Cover The Unconsoled is at once a gripping psychological mystery, a wicked satire of the cult of art, and a poignant character study of a man whose public life has accelerated beyond his control. The setting is a nameless Central European city where Ryder, a renowned pianist, has come to give the most important performance of his life. Instead, he finds himself diverted on a series of cryptic and infuriating errands that nevertheless provide him with vital clues to his own past. In The Unconsoled Ishiguro creates a work that is itself a virtuoso performance, strange, haunting, and resonant with humanity and wit. A work of great interest and originality.... Ishiguro has mapped out an aesthetic territory that is all his own...frankly fantastic [and] fiercer and funnier than before.--The New Yorker