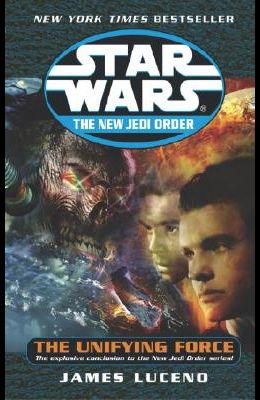 The Yuuzhan Vong are poised to conquer the galaxy and Luke, Mara, and Jacen are missing in unknown space in this climactic finale of the 19-book New Jedi Order series.

From the front Cover At long last, the New York Times bestselling series that launched the Star Wars saga into the next generation and into thrilling new territory reaches its spectacular finale. Side by side, Luke Skywalker, Han Solo, Leia Organa Solo, their children, and their comrades in the Galactic Alliance rally for their last stand against the enemy that threatens not only the galaxy, but the Force itself. The Galactic Alliance's hard-won success in countering the Yuuzhan Vong onslaught has proven all too brief--and the tide has turned once more to the invaders' advantage. Having overcome the sabotage strategies of the Jedi and their allies, the marauding aliens have pushed deeper into the galaxy and subjugated more worlds in their ruthless quest for domination. Coruscant has been remade into a Yuuzhan Vong stronghold. The remnants of the resistance are struggling to form a united front. Luke, Mara, and Jacen are missing in action. Clearly the stage is set for endgame. Now, as Han and Leia receive the chilling news that hundreds of high-ranking Galactic Alliance prisoners face slaughter in a sacrifice to the enemy's bloodthirsty gods, Luke and his team try desperately to convince the living world of Zonama Sekot to join the Jedi's final campaign against the Yuuzhan Vong. Yet even as they speak, a lone space station is all that stands between Alliance headquarters on Mon Calamari . . . and wave after wave of ferocious enemy forces waging their most decisive assault. At the same time, the Jedi's alliances throughout the galaxy are being tested--and the chances of victory jeopardized--by rogue factions determined to deploy the lethal weapon that will exterminate the Yuuzhan Vong . . . andperhaps countless other species. And among the Yuuzhan Vong themselves, the threat of revolt has reached a boiling point--as the oppressed underclass and powerful officials alike fear their Supreme Overlord's mad actions will provoke the wrath of the gods. Ultimately, for both the forces of invasion and resistance, too much has been sacrificed --and too much is at stake--to ever turn back. And now, nothing can stand in the way of seizing victory . . . or facing annihilation.

List of All Editions of The Unifying Force: Star Wars Legends