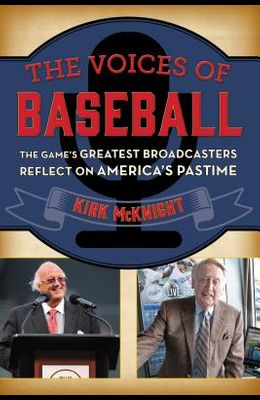 The Voices of Baseball: The Game's Greatest Broadcasters Reflect on America's Pastime

With careers spanning two to three times that of an average player, baseball's best broadcasters have no shortage of history to offer. They have witnessed opening days, no hitters, slugfests, and perfect games, all from arguably the best seats in the house. From former Baltimore Orioles announcer Jon Miller calling Cal Ripken Jr.'s record-breaking 2,131st straight game, to Red Sox announcer Joe Castiglione witnessing the Curse of the Babe being lifted the night Boston won its first World Series in eighty-six years, broadcasters know their clubs, their stadiums, and their teams in a way that no one else can. In The Voices of Baseball: The Game's Greatest Broadcasters Reflect on America's Pastime, Kirk McKnight provides an in-depth look at each of Major League Baseball's thirty ballparks from the perspectives of the game's longest-tenured storytellers. These broadcasters share their fondest memories from the booth, what makes their ballparks unique, and even how their ballparks' structural features have impacted games. Thirty-five of today's broadcasters-from newbie Brian Anderson to sixty-five-year veteran Vin Scully-pay tribute not only to the edifices that host their broadcasting craft but also to their predecessors, such as Harry Caray and Red Barber, who influenced and inspired them. With decades of broadcasting between them, their stories encapsulate some of Major League Baseball's greatest moments. Generations of baseball fans-from the veteran who witnessed Joe DiMaggio coming back from World War II to the son or daughter going through the gate's turnstiles for the first time-will all enjoy the historic and triumphant moments shared by some of the game's greatest broadcasters in The Voices of Baseball.