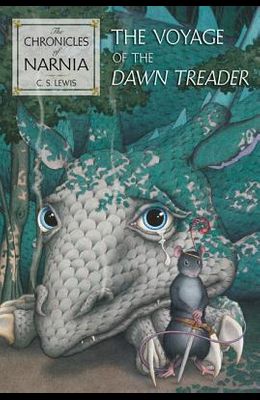 The Voyage of the Dawn Treader

Book #5 in the The Chronicles of Narnia (Chronological Order) Series
by
C S Lewis and Pauline Baynes
$3.88
Select Format

A beautiful paperback edition of The Voyage of the Dawn Treader , book five in the classic fantasy series, The Chronicles of Narnia , featuring cover art by three time Caldecott Medal-winning artist David Wiesner and black-and-white interior illustrations by the original illustrator, Pauline Baynes. A king and some unexpected companions embark on a voyage that will take them beyond all known lands. As they sail farther and farther from charted waters, they discover that their quest is more than they imagined and that the world's end is only the beginning. The Voyage of the Dawn Treader is the fifth book in C. S. Lewis's classic fantasy series, a series that has been drawing readers of all ages into a magical land with unforgettable characters for over sixty years. This is a novel that stands on its own, but if you would like to continue to the journey, read The Silver Chair , the sixth book in The Chronicles of Narnia .

From the Back Cover Narnia ... where anything can happen (and most often does) ... and where the adventure begins. The Dawn Treader is the first ship Narnia has seen in centuries. King Caspian has built it for his voyage to find the seven lords. Good men whom his evil uncle Miraz banished when he usurped the throne. The joinery takes Edmund, Lucy, their cousin Eustace, and Caspian to the Eastern Islands, beyond the Silver Sea, toward Aslan's country at the End of the World. Enter this enchanted world countless times in the Chronicles of Narnia.

List of All Editions of The Voyage of the Dawn Treader