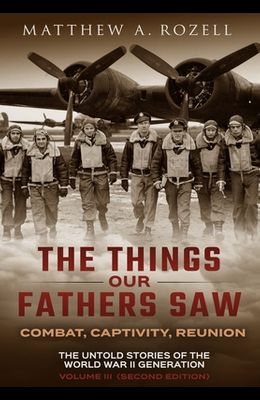 (2ND EDITION, REVISED and EXPANDED: COMBAT, CAPTIVITY, REUNION) WHAT DO YOU FILL YOUR POCKETS WITH when you're rousted awake in the middle of a freezing German night to be death-marched across Germany? WHEN YOUR BUDDY STAGGERS AND FALLS by the side of the road, and no longer even knows who you are, do you keep moving to keep yourself alive? - The next day we marched almost twenty hours, so now we were coming up to a town, now everybody is falling over, but I was in a group where everybody made a pledge to watch each other. I found myself off the side of the road and I lay in the snow and I said to myself, 'Wow, this is so warm.' I was so damn cold, I didn't know my name or anything, or where I lived-I was gone -B-24 bombardier, shot down, taken prisoner Dying for freedom isn't the worst that could happen. Being forgotten is. - We got shot down around noontime by a Messerschmitt. I was in the top turret shooting at them, and I could see their faces] as clearly as I'm looking at you. They wiped us out completely. I'm following him with the top turret gun and you could see bits of the plane coming off his tail section, but not enough to bother him. As I'm turning, the electrical cord on my flying suit got caught underneath the swivel of the turret. I ducked down, I untangled it... now I got back into my turret. Fellas, the turret wasn't there anymore. That son-of-a-gun who had been eyeing me came in and he hit his 20mm gun, took the top of that Plexiglas and tore it right off The fighters made another pass. They hit a couple of our engines; they made another pass and they shot away our controls We peeled off into one of these spirals-you've seen them on television where the plane will come over on its back and just spiral into the ground. Trees are coming up at me; I had my hand on the ripcord and out I went, headfirst. -B-17 engineer Maybe our veterans did not volunteer to tell us their stories; perhaps we were too busy with our own lives to ask. But they opened up to a younger generation, when a history teacher taught his students to engage. - I was standing on the train in Paris right next to an SS colonel-he had a satchel handcuffed to his arm, and a guard with a Sten gun. The train started up, and the SS colonel bumped into me. And he turned around to me and said, 'Pardonne moi.' I thought, 'Oh, my God ' -B-17 crewman/evadee, shot down on his first mission - What made me cry was this is a guy from Texas, and even if he didn't like blacks, or he didn't like Jews, or Catholics, or whoever, no German was going to tell him what to do-no general was pushing him around He says, 'We are Americans in this camp, and we are all the same.' They asked him for a list of all Jews, and he said, 'You're not going to get it-if you're going to shoot them, you're going to shoot us all, because we are not going to tell you which ones to pick out.' So these are the things that make me feel damn proud to be an American -Lead navigator, PoW

0
|   0  reviews
Did you read The War in the Air Book Two (2ND EDITION, REVISED and EXPANDED: Combat, Captivity, Reunion)? Please provide your feedback and rating to help other readers.
Write Review

List of All Editions of The War in the Air Book Two (2ND EDITION, REVISED and EXPANDED: Combat, Captivity, Reunion)