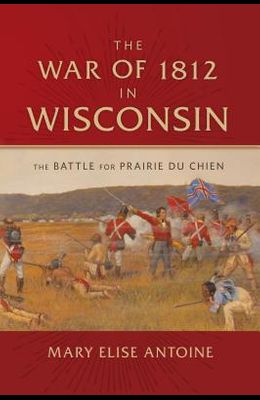 The War of 1812 in Wisconsin: The Battle for Prairie Du Chien

In The War of 1812 in Wisconsin, author Mary Elise Antoine brings a little-known corner of Wisconsin s history to life. Prairie du Chien, located just above mouth of the Wisconsin River, was the key to trade on the upper Mississippi. Whoever controlled the prairie commanded the immense territory inhabited by thousands of American Indians and the fur they traded. When war broke out between the United States and Great Britain in 1812, British and Americans fought to maintain the ever-shifting alliance of the tribes. This is the story of the battle for the control of Prairie du Chien and the western country, which began many years before the three-day siege in July of 1814 for which the Battle of Prairie du Chien is named. It is also the tale of the people, Euro-American and Native, who lived in pre-territorial Wisconsin and how the contest for control of the region affected their lives and livelihoods. The outcome of the War of 1812 would determine what manifest destiny would mean to all who called these lands home.

Books similiar to The War of 1812 in Wisconsin: The Battle for Prairie Du Chien

List of All Editions of The War of 1812 in Wisconsin: The Battle for Prairie Du Chien