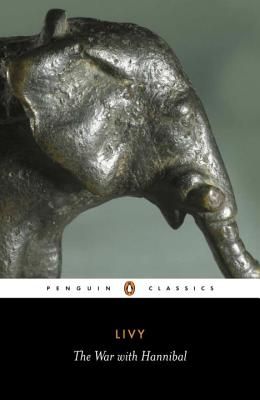 The War with Hannibal: Books XXI-XXX of the History of Rome from Its Foundation

In The War with Hannibal , Livy chronicles the events of the Second Punic War between Rome and Carthage, until the Battle of Zama in 202 BC. He vividly recreates the immense armies of Hannibal, complete with elephants, crossing the Alps; the panic as they approached the gates of Rome; and the decimation of the Roman army at the Battle of Lake Trasimene. Yet it is also the clash of personalities that fascinates Livy, from great debates in the Senate to the historic meeting between Scipio and Hannibal before the decisive battle. Livy never hesitates to introduce both intense drama and moral lessons into his work, and here he brings a turbulent episode in history powerfully to life. For more than seventy years, Penguin has been the leading publisher of classic literature in the English-speaking world. With more than 1,700 titles, Penguin Classics represents a global bookshelf of the best works throughout history and across genres and disciplines. Readers trust the series to provide authoritative texts enhanced by introductions and notes by distinguished scholars and contemporary authors, as well as up-to-date translations by award-winning translators.

The History of Rome Series In Order - By Titus Livy