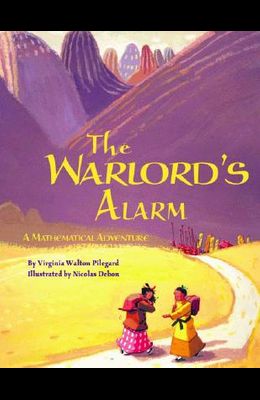 Chuan and Jing Jing use their mathematical skills to ensure that the warlord wakes up on time. They are traveling to the emperor's palace, and they can only sleep for four hours before resuming their journey in order to arrive as the emperor's gates open. How will they wake up? There are no clocks at the inn where they are staying, so they must create their own alarm clock. Chuan and Jing Jing create a simplified Chinese water clock and awaken in time to rouse the warlord.

From the front Cover ACCELERATED READER PROGRAM SELECTION Reads like a folktale . . . colorful, eye-pleasing paintings depict grand spreads. Children who like to invent, create, and problem-solve will enjoy this book. -School Library Journal This seventh book in the acclaimed Warlord's Series inspires children to use their imaginations and mathematical skills to find a solution to the characters' dilemma. Chuan and Jing Jing are worried they will not be able to wake the warlord before the sun rises. They are traveling to the emperor's palace, and they can only sleep for four hours before resuming their journey in order to arrive as the emperor's gates open. Without any clocks at the inn, how will they know when to wake up? Displaying ingenuity, Chuan and Jing Jing turn an ordinary object into something extraordinary. By observing the way Jing Jing's water bag was leaking earlier that day, together they devise a simplified Chinese water clock and awaken in time to rouse the warlord. As with each book in the series, The Warlord's Alarm includes instructions for a math-related craft. Following Chuan and Jing Jing's adventure, children are encouraged to make their own water clock by using basic materials that can be found at home or school. (Back Flap) Together, Virginia Walton Pilegard and illustrator Nicolas Debon have earned great praise for the highly successful Warlord's Series, which includes The Warlord's Puzzle, The Warlord's Beads, The Warlord's Fish, The Warlord's Puppeteers, The Warlord's Kites, and The Warlord's Messengers, all available from Pelican. Virginia Walton Pilegard completed both a B.A. and M.A. in education with a mathematics emphasis. She has worked as an elementary-school teacher and is a member of the Society of Children's Book Writers and Illustrators and the California Mathematics Council. The author of Pelican's The Emperor's Army, Pilegard lives with her husband in California. Nicolas Debon studied art at L'ï¿1/2cole Nationale des Beaux-Arts and worked for the visual-arts branch of the Ministry of Culture in France and at the consulate in Toronto, Canada. He resides in France.