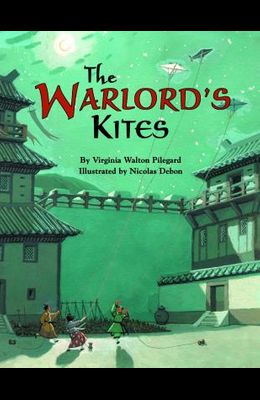 In this fifth book of the acclaimed Warlords series, Chuan and his friend Jing Jing defend the warlord's palace from an invading army when Chuan uses his knowledge of calculating to frighten the troops into leaving. Full color.

From the front Cover In this fifth adventure in the Warlord's Series, Chuan and his friend Jing Jing, the puppet master's daughter, are watching the sunset at the palace gates when they see a cloud of dust on the horizon. It is an invading army. As the palace prepares to withstand the attack, Chuan continues making paper, while Jing Jing tries to think of a way to scare away the army. Together the two use a bamboo flute, handmade paper and ink, and a little ingenuity to save the palace from a fierce battle. Children learn about creativity, folklore, and calculating area in a math lesson that's as fun as it is fascinating. Directions for making a kite follow the story. Praise for The Warlord's Puzzle, recommended by the California Department of Education This handsome picture book will be useful for encouraging children to play around with geometry at home or in the classroom.--Booklist Praise for The Warlord's Beads The vibrant and unusual illustrations of Chinese pagodas, traditional robes, and characters' faces enhance this clever story. Children will not be disappointed in this sequel to The Warlord's Puzzle. --New Favorites Praise for The Warlord's Fish An interesting introduction to the Chinese use of both the magnet and the compass . . . Debon's stunning illustrations enhance the tale. --School Library Journal Praise for The Warlord's Puppeteers The messages of friendship, cooperation, and creativity, as well as the math lesson, make this book a good choice for group sharing and individual enjoyment. --School Library Journal Virginia Walton Pilegard has been an elementary-school teacher. She dreamed up the Warlord's Series to provide children with tales of adventure that illustrate mathematics concepts. Mrs. Pilegard studied elementary mathematics and completed a B.A. and an M.A. in education. She lives with her husband in the foothills of California's central Sierra Nevada Mountains below Yosemite National Park. After working in cultural administrations in both Canada and France, Nicolas Debon lives as a freelance illustrator in Versailles, France. In addition to his illustrations for the Warlord's Series, he is also the author/illustrator of several other books, including a 2003 Canadian Governor General's Literary Award finalist. Other Titles in the Warlord's Series: The Warlord's Puzzle (BookSense '76 selection, 2000) The Warlord's Beads (BookSense '76 selection, 2001) The Warlord's Fish The Warlord's Puppeteers