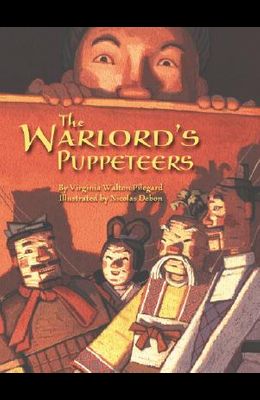 From the front Cover Clever young Chuan and his artist mentor are back in this fourth book of the Warlord Series. This time, the two are journeying across the desert to find their master, the warlord, when they meet up with a group of traveling puppeteers. When bandits attack and steal their trunk of puppets, Chuan knows that he must step in to help his new friends in order to finish the journey. Using a melon and his imagination, Chuan tries to make a new puppet so the performers can earn enough money to finish their trip through the desert. Despite his good intentions, Chuan discovers that he has a lot to learn about their craft, and he takes a few lessons in proportions. With Chuan's resourcefulness and the puppeteers' help, the troupe is able to create all new puppets and put on the show that will save the day. Children learn about creativity and compassion in a lesson in math that's as fun as it is fascinating. Directions for making their own puppets follow the story. Praise for The Warlord's Puzzle, recommended by the California Department of Education This handsome picture book will be useful for encouraging children to play around with geometry at home or in the classroom. --Booklist Praise for The Warlord's Beads The vibrant and unusual illustrations of Chinese pagodas, traditional robes, and characters' faces enhance this clever story. Children will not be disappointed in this sequel to The Warlord's Puzzle. --New Favorites Praise for The Warlord's Fish An interesting introduction to the Chinese use of both the magnet and the compass . . . Debon's stunning illustrations enhance the tale. --School Library Journal Virginia Walton Pilegard has been an elementary-school teacher. She dreamed up the Warlord Series to provide children with tales of adventure that illustrate mathematics concepts. Mrs. Pilegard studied elementary mathematics and completed a B.A. and an M.A. in education. She lives with her husband in the foothills of California's central Sierra Nevada Mountains below Yosemite National Park. Illustrator Nicolas Debon was born in Nancy, France, and now resides in Canada. He has worked in the visual-arts office of the Ministry of Culture and for the cultural service of the Consulate General of France in Toronto. Other Titles in the Warlord Series: The Warlord's Puzzle (BookSense '76 selection, 2000) The Warlord's Beads (BookSense '76 selection, 2001) The Warlord's Fish