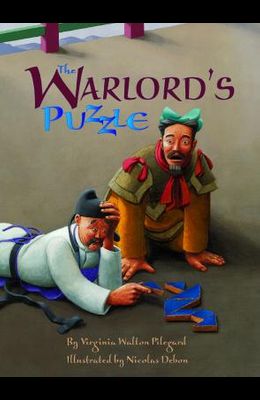 A young peasant boy convinces his poor but wise father to enter a contest to solve the warlord's puzzle, which is actually the original tangram. Recommended by the Califorina Department of Education.

From the front Cover A BOOK SENSE 76 SELECTION ACCELERATED READER PROGRAM SELECTION This handsome picture book will be useful for encouraging children to play around with geometry. -Booklist The emotions so clearly portrayed on each character's face echo those of the reader, who will finish this book with a broad smile. -Children's Literature Comprehensive Database A fierce warlord in China receives a ceramic tile as a gift. But when the tile shatters into seven pieces, he sentences the artist to the land's worst punishment. The artist proposes that a contest be held-whoever is clever enough to put the tile back together will be asked to live in the warlord's palace . . . and the artist's life will be saved. The line of contestants stretches all the way from the castle to the river. Strangers have come from all over to try their luck at solving the puzzle. All of these people have ruined any chance of fresh fish for a little peasant boy and his father, who are hungry for dinner. Most Honorable Father . . . you are a poor man and a peasant, but you are very clever. Why don't you join the line of people and try to solve the warlord's puzzle? Together, Virginia Walton Pilegard and illustrator Nicolas Debon have earned great praise for the highly successful Warlord's Series, which includes The Warlord's Puzzle, The Warlord's Beads, The Warlord's Fish, The Warlord's Puppeteers, The Warlord's Kites, The Warlord's Messengers, and The Warlord's Alarm, all published by Pelican. Virginia Walton Pilegard received a MA in education with a mathematics emphasis. She has worked as an elementary-school teacher and is a member of the Society of Children's Book Writers and Illustrators and the California Mathematics Council. She is also the author of The Emperor's Army, published by Pelican. Nicolas Debon is a freelance illustrator based in France. In addition to the Warlord's Series, he has illustrated several other award-winning books, including two that were nominated for the Governor General's Literary Award, presented by the Canada Council for the Arts. Paintings from The Warlord's Puppeteers were displayed in La Maison des Contes et des Histoires in Paris, France.