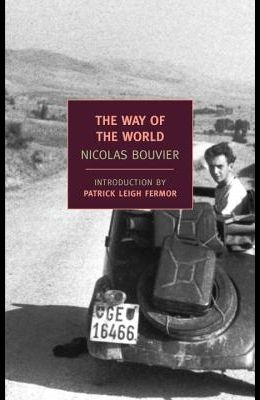 The Way of the World

by
Nicolas Bouvier and Patrick Leigh Fermor and Thierry Vernet

In 1953, twenty-four-year old Nicolas Bouvier and his artist friend Thierry Vernet set out to make their way overland from their native Geneva to the Khyber Pass. They had a rattletrap Fiat and a little money, but above all they were equipped with the certainty that by hook or by crook they would reach their destination, and that there would be unanticipated adventures, curious companionship, and sudden illumination along the way. The Way of the World , which Bouvier fashioned over the course of many years from his journals, is an entrancing story of adventure, an extraordinary work of art, and a voyage of self-discovery on the order of Robert M. Pirsig's Zen and the Art of Motorcycle Maintenance. As Bouvier writes, You think you are making a trip, but soon it is making--or unmaking--you.

From the Back Cover Belgrade. Midnight was chiming when I stopped the car in front of the Cafe Majestic. A friendly silence reigned over the still warm street. Through the lacy curtains I saw Thierry sitting inside. He had drawn a life-size pumpkin on the tablecloth and was killing time filling in the pips ... I gazed through the window for a long time before joining him at the table. We clinked glasses. I was happy to see this old project taking shape, and he to have a companion. In June 1953, Nicolas Bouvier and an artist friend set off in an old Fiat Topolino and very gradually worked their away across Yugoslavia, Greece, Turkey, Iran, Afghanistan, India, Pakistan. Bouvier made notes; in Baluchistan they disappeared; it didn't matter; he remembered everything. Ten years later he published L 'Usage du Monde, which quickly became a cult travel bible in France, and was subsequently translated into a number of European languages. It is now available in English for the first time. The Way of the World is an elegant and quietly knowing account of eighteen months spent in towns and countrysides where foreign visitors were not so often seen as they are today. Bouvier's abilities at description rank with the best; he favors the small incident, the fleeting encounter, the telling gesture above the dramatic and exotic. The Way of the World is a fine and nuanced account of one culture confronting another, and like the best travel writing, reflects convincingly on the meaning of the experience.