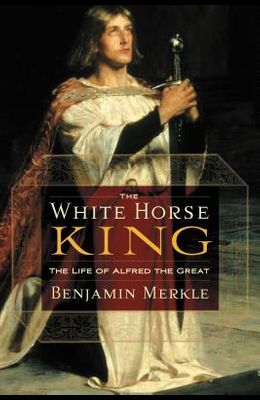 The White Horse King: The Life of Alfred the Great

The unlikely king who saved England. Down swept the Vikings from the frigid North. Across the English coastlands and countryside they raided, torched, murdered, and destroyed all in their path. Farmers, monks, and soldiers all fell bloody under the Viking sword, hammer, and axe. Then, when the hour was most desperate, came an unlikely hero. King Alfred rallied the battered and bedraggled kingdoms of Britain and after decades of plotting, praying, and persisting, finally triumphed over the invaders. Alfred's victory reverberates to this day: He sparked a literary renaissance, restructured Britain's roadways, revised the legal codes, and revived Christian learning and worship. It was Alfred's accomplishments that laid the groundwork for Britian's later glories and triumphs in literature, liturgy, and liberty. Ben Merkle tells the sort of mythic adventure story that stirs the imagination and races the heart?and all the more so knowing that it is altogether true ?George Grant, author of The Last Crusader and The Blood of the Moon