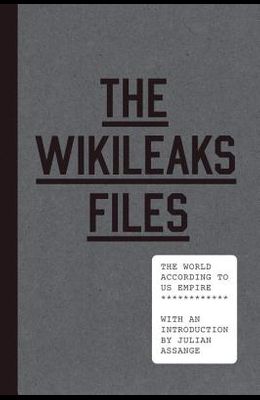 The Wikileaks Files: The World According to US Empire

by
Wikileaks and Julian Assange

Published in collaboration with WikiLeaks: What Cablegate tells us about US foreign policy When WikiLeaks first came to prominence in 2010 by releasing 2,325,961 top-secret State Department cables, the world saw for the first time what the US really thought about national leaders, friendly dictators and supposed allies. It also discovered the dark truths of national policies, human rights violations, covert operations and cover-ups. The WikiLeaks Files is the first volume that uses experts to collate the most important cables and shows their historic importance. The book explores in a series of chapters covering the major regions of the world how the US Empire has imposed its will. It reveals how the US imposes its agenda on the world: a new form of imperialism that uses a variety of tactics from torture and military action, to trade deals and soft power, in order to expand its influence. It shows the details of the close relationship between government and big business in promoting US goods around the world. The WikiLeaks Files is the most comprehensive analysis of US State department cables to date. The introduction by Julian Assange--for the first time--exposes the on-going debates on freedom of information, international surveillance and justice. Regional expert contributors include Dan Beeton, Phyllis Bennis, Michael Busch, Peter Certo, Conn Hallinan, Sarah Harrison, Richard Heydarian, Dahr Jamail, Jake Johnston, Alexander Main, Robert Naiman, Francis Njubi Nesbitt, Linda Pearson, Gareth Porter, Tim Shorrock, Russ Wellen, and Stephen Zunes.