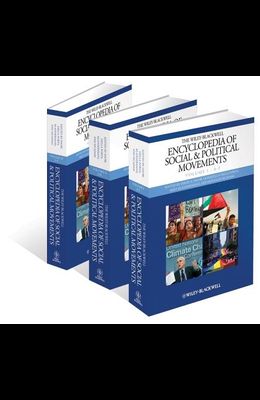 The Wiley-Blackwell Encyclopedia of Social and Political Movements

by
Catherine Snow and Donatella Della Porta and Bert Klandermans

Comprehensive, authoritative, interdisciplinary, and up-to-date, The Wiley-Blackwell Encyclopedia of Social and Political Movements contains over 400 entries across three volumes, exploring social and political movements and related collective phenomena throughout the world. Brings together a prestigious editorial team drawn from ten countries and from across four disciplines Covers a broad range of historical and modern topics reflecting significant social and political changes -from the French revolution, to the Chinese Communist Revolution, the global women's movement, to the Arab Spring, and from the American civil rights movement to contemporary environmentalism Organized, authored and edited by leading scholars, all of whom come to the project with exemplary track records and international standing Available online or as a three-volume print set, structured in a user-friendly A-Z format 3 Volumes www.socialmovementsencyclopedia.com

From the Back Cover Non-institutionalized collective action is such a conspicuous feature of today's social landscape, exemplified by recent events in the Arab world, that a day rarely goes by in which the news does not refer to a social movement or protest activity. The study of these movements is important on many levels, especially in the greater understanding it offers of the social worlds in which they emerge and operate. This Encyclopedia delivers a comprehensive, authoritative, interdisciplinary, and up-to-date reference work, filled with examples, key perspectives, concepts, relevant research methodologies, and scholarly insights on social and political movements across the entire globe. The Encyclopedia comprises over 400 entries, in a user-friendly A-Z format within a three-volume print set, and it will be simultaneously available online. The coverage is broad-based, and reflects major social and political movements and related collective phenomena throughout segments of history and across the world: from the Anti-Slavery Movement, to the Tiananmen student movement, to the Arab Spring. This work brings together a team of leading scholars, all of whom come to the project with exemplary track records and international standing. As you would expect from a resource in this field, the contributor team spans several disciplines and brings together scholars from over ten countries. The result is both an invaluable, interdisciplinary reference and a springboard for students and scholars who want to learn about specific social and political movements, and the various concepts, perspectives, and methodologies used to analyze those movements.