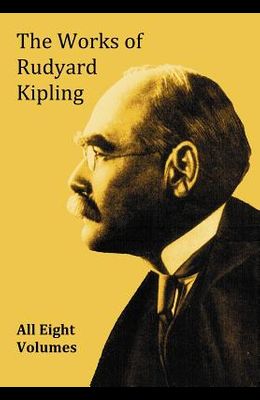 Rudyard Kipling (1865 - 1936) was an English poet, short-story writer, and novelist. He received the Nobel Prize for Literature, the first English Language write to receive the prize and to date he remains the youngest writer. He is known for writing about the Empire. Literary critic Douglas Kerr wrote, ....as the age of the European empires recedes, he is recognised as an incomparable, if controversial, interpreter of how empire was experienced. That, and an increasing recognition of his extraordinary narrative gifts, make him a force to be reckoned with. Henry James said: Kipling strikes me personally as the most complete man of genius (as distinct from fine intelligence) that I have ever known. This book contains the following pieces, originally in 8 volumes - over one hundred and fifty pieces of literature - ranging from long stories to short stories to ballads to ditties. VOLUME I Departmental Ditties And Other Verses VOLUME II Ballads And Barrack-Room Ballads VOLUME III The Phantom 'Rickshaw And Other Ghost Stories: My Own True Ghost Story, The Strange Ride Of Morrowbie Jukes, The Man Who Would Be King, The Finest Story In The World VOLUME IV Under The Deodars, The Education Of Otis Yeere, At The Pit's Mouth, A Wayside Comedy, The Hill Of Illusion, A Second-Rate Woman, Only A Subaltern, In The Matter Of A Private, The Enlightenments Of Pagett, M.P. VOLUME V Plain Tales From The Hills, VOLUME VI The Light That Failed VOLUME VII The Story Of The Gadsbys VOLUME VIII From Mine Own People, Bimi Namgay Doola, The Recrudescence Of Imray Moti Guj-Mutineer