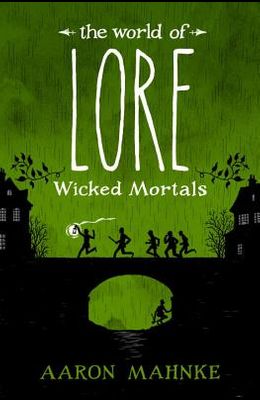 The World of Lore: Wicked Mortals

A chilling, lavishly illustrated who's who of the most despicable people ever to walk the earth, featuring both rare and best-loved stories from the hit podcast Lore, now a streaming television series Some monsters are figments of our imagination. Others are as real as flesh and blood: humans who may look like us, who may walk among us, often unnoticed, occasionally even admired--but whose evil deeds and secret lives, once revealed, mark them as something utterly wicked. In this illustrated volume from the host of the hit podcast Lore, you'll find tales of infamous characters whose veins ran with ice water and whose crimes remind us that truth can be more terrifying than fiction. Aaron Mahnke introduces us to William Brodie, a renowned Scottish cabinetmaker who used his professional expertise to prey on the citizens of Edinburgh and whose rampant criminality behind a veneer of social respectability inspired Robert Louis Stevenson's classic novella Strange Case of Dr. Jekyll and Mr. Hyde . Then there's H. H. Holmes, a relentless and elusive con artist who became best known as the terror of Chicago's 1893 World's Fair when unwitting guests were welcomed into his hotel of horrors . . . never to be seen again. And no rogues' gallery could leave out Bela Kiss, the Hungarian tinsmith with a taste for the occult and a collection of gasoline drums with women's bodies inside. Brimming with accounts of history's most heinous real-life fiends, this riveting best-of-the-worst roundup will haunt your thoughts, chill your bones, and leave you wondering if there are mortal monsters lurking even closer than you think.

The World of Lore Series In Order - By Aaron Mahnke